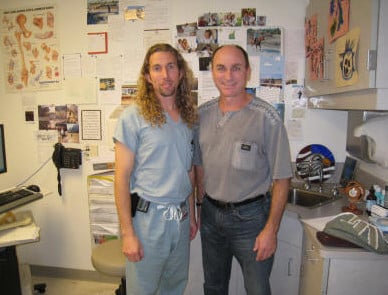 I am now 4 months post-BHR after surgery with Dr. Raphael Klug on October 30, 2009. The anterior approach was used to minimize impact and speed the recovery, and Dr. Klug himself said this is the kind of surgery he would want done on himself. From review of various videos and articles, this looked from the patient perspective to allow quickest recovery with minimized pain, while also avoiding need for any muscle detachment.

I was an extremely competitive runner into the late 1990s, actually qualifying for the USA Olympic Marathon trials a 4th time at age 43 (for the 2000 Summer Olympic Games). As I have always taken special care of my body, allowing me to push harder than most could imagine, the frustration level was quite high that I had a problem that could not be easily fixed, that actually made me question if my success had actually come at too high of a price.

My right hip had significant joint damage for someone my age, likely caused by my extensive distance running background as I logged 110,000+ miles over 30 years. The level of pain over a 4 year period starting in 2005 kept increasing, finally reaching peak levels 9-10 on a scale of 10. I tried various treatments such as anti-inflammatory pills, cortisone injections into the joint for resolution, and even had arthroscopic hip surgery in August 2009 which provided around 6 months of relief. It became obvious though mid-2009 the hip issue was not going away, and left me with seemingly two choices, either hip resurfacing or replacement. Being age 53, I was a good candidate for the hip resurfacing, so I began extensive research around the best surgeons in the USA and across the world, preparing to switch my medical insurance from Kaiser to Blue Cross (freedom to choose any provider) during my company’s open enrollment for 2010. For this type of surgery which cannot be repeated on the hip, it needed to be done 100% world class the first shot. I was intrigued in my research as I found a single Kaiser doctor in Roseville, CA who had performed a significant number of these surgeries, who had been mentioned throughout my research. I was surprised he could work for Kaiser, given the fact the Kaiser orthopedist I had seen in 2007 gave me some pain meds, told me I was too young for any surgical treatment, and live with the pain/issue until such time a hip replacement could be performed. At any rate I reviewed Dr. Klug’s video at the Surface Hippy website, very much liked him and his sincerity, and next called Dr. Raphael Klug’s office October, 2009 for more information. I was pleasantly surprised by a very helpful office staff that was quite proactive. They reviewed my charts, requested some new x-rays at the local Kaiser facility, and gave me the good news that I was a candidate for hip resurfacing as it looked feasible it would resolve my issue. Even better news came a few days later, that I would not need to wait several months for an open surgery date as they found an opening for me. This all happened pretty fast, and I was nervous, although I desperately wanted to be fixed. We scheduled the pre-op visit a few days before surgery, and my wife and I drove from San Francisco area where we live to Roseville Kaiser, providing opportunity to meet Dr. Klug in person to ask the detailed questions. I also wanted to meet him face-to-face to allow an overall assessment of his character, ask the questions to see his response, understand his background better, and if any doubt a cancellation was in order for the upcoming surgery. What I found was someone very different from any Kaiser doctor I had met, as he listened, gave me lots of time, and did not dictate to me. He was actually on par with other world class surgeons from my past, as the good ones aren’t pushing you through on a time clock, but rather consulting with you as part of your resolution team. To make a long story short, at the end of our 45 minute discussion I was 1,000% sold on him, this guy really, really cared and was really, really good. How fortunate he was with Kaiser, and I would not have to bounce my family around between medical plans once again!

I still remember, as we were leaving his office after this first visit, we bumped into him again in the hallway heading towards the elevator. He saw me walking and made comment about my significant limp of which I had become accustomed. He was clearly compassionate, and made some interesting comment, implying after he performed his work the issue would disappear. At that moment I was certain, that utilizing Dr. Klug for this surgery was the right thing to do.

On surgery day I was his last surgery as we headed into evening. I saw him walk by while I was in the waiting room, and told him if he was tired from prior surgeries to let me know and we could cancel for another day. I wanted this important surgery done right! He quickly came back to me with, “I feel awesome!”, and “I’m warmed up and ready to go”. Wow, he never stopped getting my confidence up.

The stories continue around Dr. Klug prior to going under for actual surgery. At admissions on surgery day I was told by the hospital administrator, “You know, Dr. Klug is our finest surgeon”, to which I replied I knew this given my research, and given the fact we checked into a hotel for my wife while taking a long drive for the surgery. I also overheard another young patient in the pre-op area asking about doctors each time they walked by, asking her father who seemed to work there to identify Dr. Klug. He finally shot back to others in their group that Dr. Klug has rock star status around here. A short time later Dr. Klug walked to my bedside, the last visit before surgery, and I was happy the rock star had arrived to get things started! I still remember rolling into the operating room, and just before going under (had spinal anesthesia, sedated to sleep) I see Dr. Klug sitting at a computer carefully studying my charts. What else could you expect, this is a world class surgeon working hard and showing no sign of complacency.

It has now been 4+ months since the surgery. It was the normal recovery you hear about, down and out for 1-2 weeks, and then more activity, and about a month later walking fairly normal with relatively little pain. My pain which was hitting the highest threshold on a 1-10 scale is now 99% gone. I have a slight amount of numbness on the outside of my thigh, which I think is part of the tweaking required to work on the head of the femur, and a very slight amount of joint discomfort if I push some activities (i.e. running around with the kids) too hard. If non-impact such as biking is involved I am now pain free. It’s still hard for me to get use to this! If I sit for long periods of time I expect pain when I stand, and I’m always amazed it’s just flat out gone. My brain after all the difficult years will take time to accept I’m back to normal once again.

I have had highly successful knee surgery and Achilles surgery with Dr. Arthur Ting (Fremont, CA), and hip arthroscopy with Dr. Thomas Sampson (San Francisco, CA), both world renowned for their medical achievements. Dr. Sampson performed my unsuccessful hip arthroscopy, and for resolution was hesitant about perform resurfacing as he indicated significantly more skill required, versus performing his standard hip replacement. With that comment I quickly scratched him from my candidate list of doctors to help going forward. I now put Dr. Klug into their elite company, and actually put him at top of the list. He is compassionate, knowledgeable, highly skilled, and really wants to resolve issues and make a difference.

I have three young children, and now I have my life back once again, as my focus is no longer consumed with 24×7 pain. I wanted to share my story; this is an excellent surgery to consider, and Dr. Klug is as quoted by a patient in the pre-op area “a surgeon with rock star status”. I’ve always treated my body like a temple, and without doubt trusting Dr. Klug to resolve the damage I had caused was the right thing to do. To provide the highest longevity for this wonderful surgery I won’t race again, or train hard as a distance runner. I will though always consider myself fortunate that Dr. Klug has given me back a very normal life.

The photo taken with Dr. Klug is from my follow-up visit, about 5 weeks after surgery. The walls which are the background of the photo are filled with photos and letters of gratitude from his past patients.