↓
Home→Hip Resurfacing Information→Choosing between hip resurfacing and THR by Dr. Brockwell
April 2013 What are the alternatives to hip replacement for arthritis of the hip? First line treatment: 1. Physiotherapy to learn ‘joint protection’. 2. Swimming or cycling each morning to ‘loosen up’ the hip. 3. Soft soled shoes and avoiding impact. 4. Diet rich in Omega 3 (essentially a fish diet – OK for people who enjoy fish and do not enjoy red meat, but probably not worthwhile for steak lovers). A helpful article: http://en.wikipedia.org/wiki/Omega_3_fatty_acid 5. Glucosamine 1.5 grams once per day regularly [1, 2]. 6. Paracetamol/acetaminophen [Tylenol or Panadol] as required for pain. If pain is not controlled by paracetamol one can take antiinflammatories such as ibuprofen Advil/Nuroen/Brufen) diclofenac (Voltaren) or celecoxib (Celebrex) or etoricoxib (Arcoxia) as needed. Second line treatment: Injections of steroid, platelet rich plasma (PRP) or hyaluronic acid as required. Third line: Therapeutic arthroscopy (keyhole surgery) if the arthritis is not too advanced. This option is worth considering if there is over 2mm of joint space on the X-ray, especially for younger people. Final: Hip Replacement

When should I consider hip replacement?

We believe that modern hip replacements will last for many years, so there is little advantage in delaying the procedure if pain is affecting sleep or daily life despite treatments utlined above.

What kind of hip replacements are available?

There is a variety of modern total hip replacements, most of which give good results, and three major modern bearing combinations: metal or ceramic on cross-linked polyethylene; ceramic on ceramic and metal on metal.

How long do they last?

The most important issue affecting the longevity of a hip replacement is wear particles generated by the bearing. The early designs of metal on polyethylene (developed by Sir John Charnley) functioned well in the medium term, but all failed in the longer term because the wear particles caused a reaction which led the the bone supporting the implant to be eaten away. New bearings have been developed to overcome this problem. Of those commonly available today, all are giving good medium term results, but none has been in use long enough for us to see the long term results. The original polyethylene bearings have been treated with radiation to cross-link the molecules in the polyethylene (similar to vulcanising rubber) and improve wear resistance. However the bearing is not lubricated, and some wear particles are generated, in proportion to the amount of activity of the patient. We believe that a modern polyethylene bearing will take 20 years to generate enough wear debris to loosen the implant with moderate use – for example a person of average weight who is not especially active. Ceramic bearings have been developed which produce less total quantity of wear debris, although higher numbers of particles, because the individual particles are smaller, but they seem to be less biologically active, and cause less bone reaction. Like polyethylene bearings, most modern ceramic bearings are not fully lubricated, but they do require some lubrication, and ceramic bearings can squeak if they do not receive adequate lubrication. Metal bearings are, when correctly positioned, fully lubricated, and do not produce any significant wear, however, if they are poorly positioned they produce very corrosive wear debris which eats away the tissues very quickly. Some of the early metal bearings, implanted in the 1960s, outlived their owners, so it is possible that a lubricated metal bearing could last indefinitely.

Metal bearings offer the best chance of the highest possible functional recovery, as the bearings are not brittle (unlike ceramics) and can therefore withstand impact, and, because of their large diameter, very rarely dislocate (unlike smaller diameter polyethylene and ceramic bearings), so one can return to unrestricted activity.

There are, of course, other factors to consider, but for most individuals, the other factors are relatively minor after longevity and activity.

Should I choose a hip resurfacing or a conventional total hip replacement?

I am older – what should I choose?

Although hip resurfacing was developed for the specific problem of young active people wearing out conventional hip replacements, hip resurfacing is not limited to young people only. Governments making health care decisions for their entire populations will not recommend hip resurfacing for older people, as the additional cost of the resurfacing implant (versus cheaper conventional THR implants) is not worth it from a public health point of view. Also, the additional technical challenge of performing a resurfacing versus a conventional THR means that slightly fewer will be performed in the same amount of time. However, for an individual in good health, who aspires to be more active than the average individual of the same age (Heli-skiing versus shopping), there is no evidence that resurfacing carries more risk (maybe because the trials have not been carried out) and there are reports of good success in older people [4, 5]. My oldest patient was 88 when he had both of his hips resurfaced in one operation. He was soon back on the golf course, and is very happy. Slightly younger patients (in their sixties & seventies) put their resurfacings to good use – hiking, swimming, golfing, skiing, cycling etc.

Could they have done this with conventional THRs?

Possibly. Golfer Tom Watson famously played off for the British Open 9 months after a conventional THR, but he is unusual. Jack Nicklaus has not played competitively since his conventional hip replacement.

I am female – what should I choose?

There is some concern that women do relatively poorly with resurfacings, and there is conflicting evidence, but there is a substantial body of opinion that, controlled for implant size, there is no sex difference, in other words, men and women of the same size do equally well [6]. That said, smaller people do not do as well as larger people, probably because there is less room for error in acetabular cup positioning with smaller sized implants.

As with most things in medicine, there is much debate, but much recent evidence supports the position that hip resurfacings give better function [7-10]. However there are at least two papers which report no difference [11, 12]. One of these papers was criticized for reporting a difference of 10% in walking speed as ‘no different’ when many would argue that the ability to walk 10% faster is very significant [13], however the other paper describes a well-designed trial, so there is at least one study reporting no difference in function. As far as I am aware, there are no reports of worse functional outcomes in hip resurfacing compared to conventional THR.

What if I have osteoporosis?

The term ‘broken hip’ usually applies to older people breaking the upper end of their femur as a result of a fall. Young people can break their hips, but, as the bone becomes weaker because of age-related decreases in bone density, this injury is more common in older people. It is a serious injury. If one has a hip replacement of some sort, one can still break one’s hip – but the bone breaks around the hip replacement. If one has a hip resurfacing the broken hip follows the same pattern as in a natural hip, and is treated in the same way [16-19]. If one has a total hip replacement the bone breaks around the femoral stem, and is more difficult to treat [20]. This is not yet considered to be an important factor in choice of hip replacement design, probably because hip replacement surgeons do not deal with many broken hips, but, as the younger patients who are receiving hip resurfacings grow older and suffer broken hips in larger numbers, it is likely that the trauma surgeons who deal with the majority of broken hips will compare the outcomes, and I expect they will conclude that patients with resurfacings will do better.

Is there anything else I should consider?

There is a single paper analysing the British National Joint Registry suggesting that overall mortality is lower in resurfacings versus total hip replacement [21]. This is presently unexplained. Mr McMinn’s team (the developers of the Birmingham Hip Resurfacing) analysed the publicly available data in the UK National Joint Registry comparing Birmingham Hip Resurfacings to all other types of hip replacement for men under 55 with osteoarthritis. Table summarising properties of three major types of hip replacement 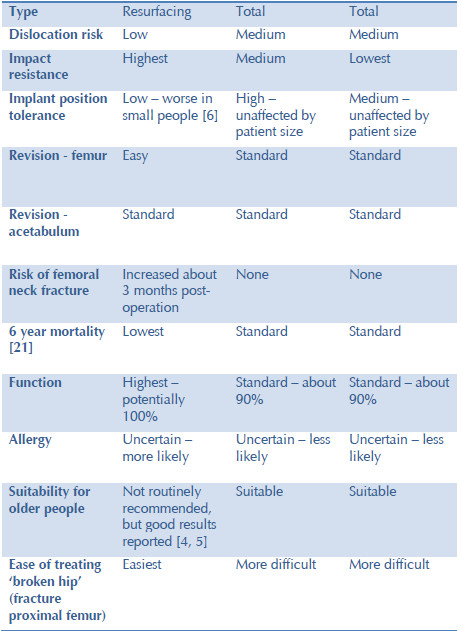