Published on Feb 2, 2016 Here is a training pattern I put together for the new Century Versys VS Bob.

Two weeks before my 40th birthday I was diagnosed with severe arthritis in both of my hips. The apparent cause of my arthritis was femoroacetabular impingement (FAI) coupled with almost 30 years of martial arts training. At the time I knew about the limitations of traditional hip replacements, especially for someone as young as myself, and I was devastated to say the least. The thought of never being able to train again (at least not anywhere near the level I was accustomed to) was very hard to deal with.

While researching my options I found the SurfaceHippy web site and began to find hope again. However, this was also at the time when all the negative headlines regarding hip resurfacing were hitting the news outlets. One of the first surgeons I spoke with (who was on the faculty at a nationally known teaching hospital) told me I would have to be “insane” to have the procedure. There seemed to be so much contradictory information on the internet regarding the risks and benefits of hip resurfacing. As a college mathematics/statistics professor, I used my skills in statistical literacy to analyze all the medical papers I could find on the subject. It quickly began clear to me that as long as I used a top surgeon (based on volume and published results) I would be able to get my life back again.

My search for a doctor lead me to Dr. Peter Brooks at the Cleveland Clinic. I was impressed by his training, the volume of procedures he had performed, his results, and the fact that he was in my health insurance network sealed the deal. I traveled five hours from Central PA to Euclid Hospital in Cleveland, OH, and had my right hip resurfaced on May 8, 2013. My left hip was resurfaced on December 5 of the same year. My experience with Dr. Brooks, his assistant Phil Golnick, and the entire staff at Euclid Hospital was tremendous. Everything went very smoothly, and I was off all pain medication in about a week after each surgery and had very little swelling or discomfort. It is a testament to Dr. Brook’s skill and care that I experienced so little pain.

My rehabilitation was rather uneventful.  I took the slow and steady route, especially when it came to training in the martial arts.  My hips now feel perfect and I rarely give it any thought that I have artificial hips.  The results of my bilateral hip resurfacing are simply amazing—I’m back to teaching martial arts again and do not feel like I have any real limitations.  Below is an x-ray of my hips and a video of what I am able to do with my hip resurfacings (taken in February of 2015—14 months after my second hip surgery). 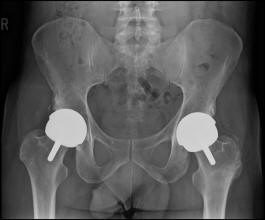