No regrets – live life while you can!!!

In 2009 I was 34 and running about 20-30 miles per week and surfing every chance I had, but something wasn’t right. It was taking more and more miles on the road to get my stride warmed up and pace going and when I surfed I was feeling more and more stiff; since I worked behind a desk during the day I just attributed these symptoms to desk legs. In November of that year the pain came on and I could not even run around the block, let alone pop up on the surfboard. In January my chiropractor orders x-rays when treating me for my lower back pain and low and behold I was told I had the hips of an 80 year old.

My local orthopedic recommended Dr. Sharat Kusuma and the Birmingham Hip Resurfacing procedure, but a procedure like this is not something you jump into without being absolutely sure yourself. So I started the research phase of my procedure visiting websites, blogs and inquiring with various doctors including the local hip doctor who performed my father’s hip replacement. The more I looked into the issue the more I realized you do not want to settle for a doctor new to hip resurfacing. During this time Dr. Kusuma was readily available via email and cell phone to answer my questions about his practice, experience and credentials in the hip resurfacing field.

In April of 2010 the pain became so unbearable I was not able to surf anymore. I continued to workout in the pool, but with a pull buoy as I could not kick. By August I decided to proceed with the surgery and travel from Florida to the Grant Medical Center in Ohio where Dr. Kusuma practices. At 35 years of age, the thought of missing an additional year of activity and the enjoyment of playing with my kids (without pain) was unbearable.

On December 1, 2010 I flew to Ohio for my right hip resurfacing on the 3rd. The morning of the third, I packed up my bag at the hotel and walked (with a limp) down the street to the hospital. A few hours later the pain I had, by this point on a continuous basis, was gone. Of course there was the surgery pain now, but my hip pain was gone! I flew home on December 7, 2010. By the end of the month, after the staples were removed, I was in the pool swimming and without a pull buoy – I could kick again. Although my other hip hurt, it was not as bad as having two bad hips.

In April of 2011 I took my longboard out on a nice small mellow-wave day. As the months went by I continued to swim and build up my leg strength longboarding on small days. By summertime I was able to charge some bigger days, but stuck with the longboard since my left hip was still bad and I didn’t have a wide enough stance for a shortboard due to its limited flexibility. (See attached pic of me longboarding with my one good hip.) However, the pain told me I needed to do my other hip and so I scheduled the surgery for November 2011.

November came and went and my second surgery was as successful as the first. Today I am 1.5+ years post my second surgery and doing great! See attached picture of me surfing in October 2012 – back on a shortboard!!!

If looking for a great hip resurface doctor, Dr. Kusuma should be at the top of your list.

Cheers and good luck to all of you going through this. 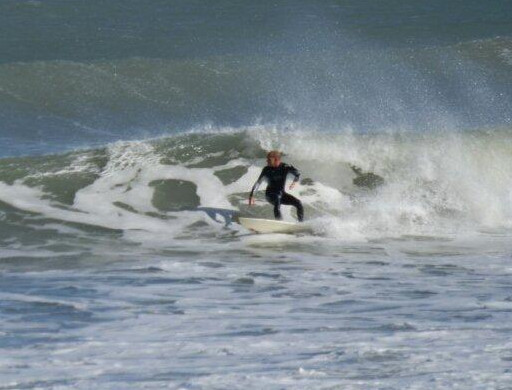