Birmingham Hip Resurfacing: Regaining the Ability to Walk By Joyce A. Reed

Like many Americans in their 50’s, I suffer from various forms of osteoarthritis. For the past two years, the arthritis pain in my right hip gradually increased. One day in January 2007, I woke up in the morning and stepped out of bed placing my normal weight on my right leg. A sharp pain shot from my right foot to my hip, and I sat back down quickly. 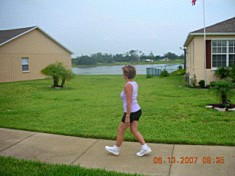 I made an immediate appointment with my orthopedist, and he discovered that the cartilage in my right hip joint was gone! The joint surface was literally “bone-on-bone”. He told me that I needed hip replacement surgery. I tried to discuss other options with him, but he retorted, “You are not going to get out of this one!” I needed the surgery.

Knowing nothing about hip replacement surgery, I researched the surgery on the Internet and in issues of Arthritis Today© for answers to my many questions. I discovered a recently approved FDA surgery originally developed in Europe, Birmingham Hip Resurfacing.

Birmingham Hip Resurfacing [1] can be compared to capping your teeth instead of pulling your whole tooth and replacing it with an implant. The actual device is all metal consisting of chromium steel. It is simplistic in design being a socket and ball with an attached stem. Unlike the former hip replacement devices, the Birmingham does not have plastic parts that can easily fail. The Birmingham procedure has been used in Europe for a few decades, and one marathon runner reportedly is successfully running/walking on his/her Birmingham hip replacement for 10 after the surgery. S/he has placed 35 life-cycle-years of use on his/her hip. A life-cycle-year is how far a normal person walks in one year.

On the internet, I found Dr. Stephen Raterman of Tampa, Florida. Dr. Raterman was the closest orthopedic surgeon using the Birmingham system to my home. I called and made an appointment. While I waited for the appointment, I started using a cane to walk since the pain of placing any weight on my right leg became unbearable.

During my first appointment, Dr. Raterman and his staff were attentive, professional and friendly. They x-rayed my hip and found that the ball section of my right hip joint had completely collapsed. Dr. Raterman carefully explained the details of the surgery to my husband and me. He told us that he would try to perform the Birmingham Hip Resurfacing on me by grafting bone to buildup my collapsed socket. Once the surgery began, if he discovered that he could not graft enough bone to do the resurfacing then he would do a Birmingham Hip Replacement. The Hip Replacement uses the same device as is used in the Hip Resurfacing, but the stem on the ball is longer to give the Replacement the stability it needs to operate correctly. When I left his office, I was very comfortable about my upcoming surgery.

In early May 2007, I checked into the University Community Hospital at Fletcher in Tampa, Florida. The hospital staffs were friendly and helpful. They quickly and easily prepared me for my surgery. My husband remained with me until I was moved into surgery.

My surgery lasted about two hours. My husband was impressed with the electronic patient status monitor in the waiting room. The board gave detailed information about me to him concerning pre-operation, operation and post-operation status. I woke in the Recovery Room with only a mild sore feeling in my hip. While everyone was very concerned about my pain levels, I never really had any pain. The surgical scar was only about 12 inches long and very thin. If I regained my ability to walk, it was a small sacrifice to make. My husband joined me in the Recovery Room, and I was quickly moved to my hospital room.

The hospital nursing and therapy staff provided excellent and friendly care. The day following the surgery, my therapist got me out of bed and up on my feet. The pain in my right leg was gone! I continued therapy and was released two days after my surgery.

I walked with a walker while in the hospital and for approximately ten days after leaving the hospital. I then went directly to walking with a slight limp for another week. The limp gradually improved until I walked normally again!

I did have one obvious post-operative problem. How could I pass through Homeland Security checkpoints at airports if I had a large metal object inside of my leg? Dr. Raterman’s office solved this problem by issuing me a medical security card listing my name, date of operation and an illustration of the device. Homeland Security accepts the card in conjunction with my normal picture identification.

I believe that writers overuse the word miracle, but miracle is the only word that fits my Birmingham Hip Resurfacing experience. The surgery changed my life bringing me from someone who could barely walk with a cane to normal walking. I can now completely enjoy my life.

I cannot find the words to thank my doctors, especially Dr. Raterman, for performing this miracle. I also want to thank Arthritis Today© for publishing informative articles that led to my discovering the Birmingham Hip Resurfacing.