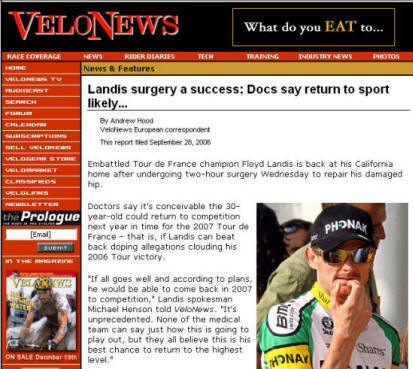 Floyd Landis is coming back to cycling, and says his sport will be better for it.

Landis’ feel-good story came to halt when he was stripped of his 2006 Tour de France victory following a doping scandal and protracted fight in courts around the world. He said Thursday he feels “like a kid again” knowing that his two-year ban from cycling will end next week.

“In my mind, it’s already behind me,” Landis said in an interview with The Associated Press. “I’m not dwelling on that at all.”

Landis was barred for using synthetic testosterone in the latter stages of cycling’s showcase race three years ago. He contends the testing system is flawed, but he has no means left to fight other than to resume racing.

The Murrieta, CA resident trained in San Diego and is returning to the county in his return to the sport.

He will ride for the OUCH cycling team and debut at the Tour of California next month, starting what he plans to be at least two years with OUCH, which opens its training camp Friday.

“This isn’t some kind of statement to shut down the critics or any kind of changing-the-world project of mine,” Landis said. “This is me doing what I’ve trained myself to do for the last 15 years, and I hope that the people that follow bike racing get a better show than what they’ve had the last couple years.”

His return comes on the heels of seven-time Tour champion Lance Armstrong resuming his own racing career. Armstrong is currently in Australia at the Tour Down Under, his first competitive race in three years. They’ll be linked at the Tour of California, which Armstrong is planning to make his next race — and cable channel Versus said Thursday it will show all nine days of that event..

…Landis says he feels as good as ever, in large part because his right hip is now pain-free. He underwent hip resurfacing surgery two years ago, relieving the bone-on-bone pain that plagued him for years, even during that 2006 Tour.

OUCH is sponsored by Dr. Brent Kay, a devout cycling enthusiast from California who has worked on Landis’ hip for many years and is a close friend of the rider.

He said when the opportunity came to sign Landis, he didn’t hesitate for one second…

Landis not ready to ride into sunset

Three years ago this week, his legs aching and his lungs on fire, Floyd Landis staged one of the greatest comebacks in the history of the Tour de France…

…His improbable ride that day was all the more remarkable because he was experiencing severe hip pain and avascular necrosis to the femur head (diminished blood supply – remember Bo Jackson?) as a result of a training accident in 2003.

Landis wrestled with what do – a complete hip replacement would have all but ended his chances to be a world-class cyclist again when his suspension was lifted this January. Landis decided to have a relatively new operation called the Birmingham Hip Resurfacing, which was performed in October of 2006 by surgeons from Smith and Nephew, the British jointmaker.

In hip-joint resurfacing, only the surface of the hip socket and femur ball are replaced. It is kind of a cap at the end of worn-out bone, sparing much of the original joint..

…It changed my life,” said Landis, who hopes to compete in the Tour de France next year. “I’ve ridden almost 20,000 miles on my new hip. I have completely recovered.”