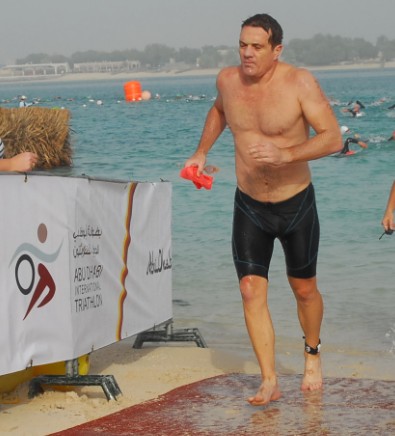 These are some notes that might help anyone going into the hip repair project. Story starts in 1999, after doing a gym competition, which involved spinning at 150+ RPM for about 7 minutse; to win a track suit (never collected) my hips became very stiff. Ignoring this for a year, did a long triathlon in Japan, with a marathon at the end – reasonable runtime but sore in bad way.

After this, went to the doctor, assuming I’d pulled some muscles, the x-ray identified primary osteoarthritis in both hips. At 40, this was not good news. The spinning did not cause the problem, but revealed it. The pain on the left increased to the level of interrupting sleep. After some research, I flew to L.A. Dr.  Klapper did an arthroscopy on the left. This guy also co-wrote a book “Heal Your Hips”. It describes many useful exercises, and worth reading, especially in the strengthening stage after the operation, although that’s not the book’s intention. Studies seem to show when done in appropriate circumstances, arthroscopies can keep the joint going up to 10 years.

Spent the next, nine years doing mostly cycling and play swimming, taking an increasing amount of NSAIDs. In 2008 decided to “get off” NSAIDs, this takes a bit of effort, and included cutting out junk and fried food. Managed reduce Mobic to only after hard exercise. Was able to do the Langkwai Ironman in 2008/09 (shuffling and mostly walking). By this stage, the pain was manageable, however, my knees were moving about 6-8 inches from the top tube, and starting cause problems. All internal and external rotation had gone in both hip joints.

From this website, I contacted Dr.  Bose in Chennai. The X-rays showed I had Femoroacetabular Impingement and Pistol Grip deformity in both hips. Dr.  Bose resurfaced my left using the Birmingham hip in Chennai, ten days after the 2010 Langkwai Ironman. Whilst, the operation is not to be taken lightly, it equates to hard event and a kick in the bum. All that time spent on the bike and road may not have been wasted. The operation is best treated as an event.

Dr.  Bose resurfaced my Right Hip August 2011. The second time round is pretty easy. Once you know what’s going to happen and have confidence in the surgeon – it’s mechanical. By day three – walked a couple of km on crutches, and had flown home and back at work in five. The ease of the second operation indicates that the first time could be less stressful with a more relaxed attitude.

You need crutches for a few weeks, I used one for touring around the bike; bungee cord strapped across the back to go between coffee shops on a bike at day 10. Immense amounts of coffee also cure any post-operation constipation. The first side operation I raised the seat by 4 cm and put on clip less pedals. The seat raising was a good idea; however, it’s better to use clip-in pedals, because you can use the non-op side to get up small hills. The operated side can get the cleat out easily. For several rides, don’t expect to put any work through the operated side.

After the first operation, I did not run at all for 7 months and ignored the option of walking. Following the second, I started hard walking at about 3 months. I found I could walk at about 8 min/KMs, which was much better than any recent “zombie wandering pretend runs”. Hard walking gives you the option of continual improvement without the impact stress of running. Was able to walk a 2:50 ½ at the end of 70.3 at 4 months. At six months, did the Abu Dhabi long course race. This has a 200 KM bike – on the bike there is no issues from the joint – it’s like being able to cycle 20 years ago (although slower as the other bits have sadly aged). After years of cycling like “Charlie Chaplin”, it took a while to get into an aero position; I tried a few saddles but settled on the Cobb model – as all the soft bits had to be reconditioned after years of enforced upright biking.

Cycling does not seem to warm the joints for running. The running/walking warm up is independent. So you can’t start too slow. I need at least 1km warm up, this makes the rest of the session/event much more enjoyable.

From six months out started 8 KM sessions, walking 400 meters jogging 200 meters; three times week and extending the jogging sections. Following Dr.  Bose’s advice, I back off from everything with any discomfort from the joint. Also used the exercises in “Heal Your Hips” in the pool to strengthen the hip joint; now able to do 8km continuous at 7 min pace, without any unnatural feeling from either side. The particular numbers don’t matter, improvement and the ability to exercise without the misery of hip pain is just fantastic. Now at 18/ 8 months and barely notice both my hips are metal.

Short term goal is to get reasonable at 70.3 distances; a 2 hr ½ run is a decent target. The long term goal, is of course, is to be put in the incinerator with my BHRs in place.

Final words, for this operation, make sure your surgeon has done lots of these operations, for the device – statistics matter; marketing documents have the nutritional value of McDonalds. Prior to the operation, the world is completely focused on the pain and medical issues. This focus will rapidly recede once you get the joint fixed up – this is probably hard to imagine if you are pre-op, but it’s true. I see myself as an aging car that needs continual repair – but do have a very cool tri-bike and the ability to set airport alarms ringing.