I used Dr. Rector in Boulder.

I feel the BHR surgery which occurred on April 22, 2010 gave me a 2nd chance at an athletic life. It used to take me 30 or more seconds to stand up out of a chair. Since my surgery I have been using the stationary bike for about 1/2 hour and working out on the elliptical for about 20 mins. 2X per week and balancing on the bosu ball for a few minutes on each leg during my workouts.

At 10 months out from my surgery I began playing soccer again. I am a 58 year old skinny Italian soccer player. I have played soccer at least once a week for 40 years without a break unless I was injured or on vacation. I am not a great player, but a great lover of the sport.

At 10 months and played for about 45 minutes outdoor. My surgerized hip was a little sore, nothing to speak about but more sore than normal a day or 2 later. About as sore as my good hip which has some arthritis.

At 12 months now I am playing full 1 1/2 hour games at 90% pace. I have some dull pain after games and a few days later. After resting, my hip seems to hurt a little more in certain positions but nothing significant. I use no anti inflammatories and no ice. It’s no big deal. I did develop a slight medial aductor groin strain but its very playable. I just need to rest it a little more. I don’t feel it is related to the surgery but perhaps my lack of side to side rehab training as a bike does not help develop the aductor.

I am beyond happy. My heart and psyche are rejuvenated. I feel warm in side, like I’m standing next to a fireplace. There is nothing like the feeling of being in shape again.

I do worry though that I should have learned my lesson, to stay away from impact sports. To some degree I feel am taking advantage of this second chance. I feel a little guilty. There are some angles I move my leg that something doesn’t feel quite right, I fear that if I twist the right way in a tough physical play that something is going to pop out or snap. Maybe just in my head. I don’t know.

Sometimes I think that you should just gracefully get old, take it easy on your joints to extend their life and go out to pasture voluntarily; retire to the boring low impact things like golf. 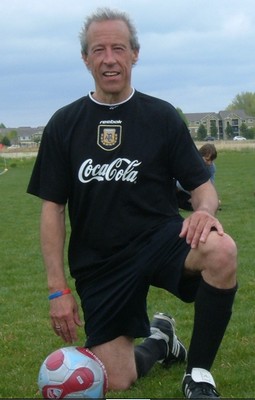