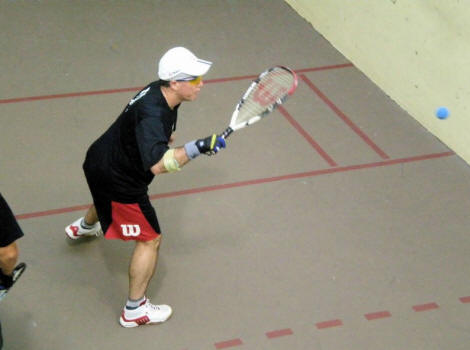 Picture from a racquetball tournament in April (at 16 months). I have played two tournaments this year 2008 (Open doubles division), and won 2nd place each time.

My name is Paul Owens and I’ve been an avid racquetball player in and around Florida for many years. In December 2005 I developed a severe pain in my right hip after playing racquetball. I was only 47, but I later found that I had a slight curvature in my spine that contributed to my arthritic condition. Any attempt to run or play sports left me miserable for many days.

This story may sound familiar in that I discovered Resurfacing almost by accident. After getting the “you need a Total Hip Replacement” story from a couple of respected surgeons, I began using the Internet to research alternatives to THR. Initially I found “Resurfacing” and then later stumbled upon the “Surface Hippy” group. From there I was able to make an informed decision about my future. From the SH group I learned that one of Dr. Amstutz’ protégées (Dr. Vincent Fowble) had recently moved to Jupiter, Fl. I traveled 2 hours to pay him a visit. I was very impressed by his knowledge and the fact that he is involved in the design of the Wright Conserve Plus (C+) device. After the first visit and much additional research, I settled on the fact that I had found the right procedure and the right surgeon for me.

My need for resurfacing was not solely driven by my desire to return to racquetball as much as a desire to lead a normal, pain-free life. My parents have a cabin in the mountains of North Carolina, and even short walks with my daughter proved to be a major strain on my hip, and took many days to recover. I couldn’t bear the thought of NOT taking walks in the mountains with my child. The cabin will be in my family for many years and I needed to take the necessary steps to become an active parent again.

I had surgery in December 2006 at age 48. Because there many success stories associated with this procedure, I began to entertain thoughts of returning to the sport of racquetball. I felt I was a good candidate health-wise, with good bone density and the willingness to do whatever it takes to regain all aspects of my former life, which certainly included racquetball. Because of the high-impact nature of the sport, Dr. Fowble & I set a conservative plan in place to accomplish my goals. The basic rehabilitation consisted of the “standard” therapy exercises to strengthen the hip. I added more biking, swimming, and I purchased a “slide-board” which I feel really helped me with the core training that racquetball demands. From the SH web site I received additional tips (such as marching and stretching exercises) to increase my range of motion.

I began playing with friends at 6 months, but it was not until the 1 year mark that I felt the ability to really put competitive stress on the hip. I found that I can still play competitively, but I am basically thrilled and thankful to be playing again. I entered two tournaments this year and have two 2nd place finishes in the Open Doubles. I mailed my first medal to Dr. Fowble, who deserves the award as much as I do. But I am keeping the rest of them for myself!