… Read the rest
Baseball after hip resurfacing with Dr. Della Valle. “Thanks again for another successful resurfaced hip. I now have both hips resurfaced, and I feel almost at full strength after 8 months… Read the rest
Wally Green Published on Apr 16, 2019 Hip resurfacing surgery @ HSS by Dr. Edwin SU. The road to recovery. On April 11 2018 I had hip resurfacing surgery by Dr. Edwin Su at the Hospital for Special Surgery. I had waited 10 years too long. My PT told me that if did not get it done immediately I would risk fracturing my hip and never play sports at again. That scared the $%#* out me, and I finally got it done! Definitely one of the best decisions I have ever made in my life. With the best hospital, the best surgeon comes the best recovery!… Read the rest

Hip Resurfacing patient, Andy Murray, meanwhile, may have been watching on with interest in the match with Bob Bryan.  Bob Bryan secured a second title of the season. Bob is returning to tennis after hip resurfacing surgery at the start of this year.

Bryan had the same hip resurfacing operation as Andy.  He won the three-time Grand Slam champion last summer. He partnered his brother Mike to a 7-5 7-6 (10-8) win over Greece’s Stefanos Tsitsipas and the Netherlands’ Wesley Koolhof.

…The Birmingham Hip Resurfacing technique has enabled thousands of patients, including many high profile athletes, to reduce pain and increase mobility…

…The BHR is also the world’s most successful metal on metal hip resurfacing system with over 140,000 implantations globally…

“It is likely that Andrew Murray has been advised to choose the Birmingham Hip Resurfacing procedure because it provides him with the best chance at retaining as much movement and stability as possible.” said Mr. Andrew Peasron in his article about Andy Murry’s recent hip resurfacing.… Read the rest

…Prof Fehily added that “90 to 95% of patients who have this surgery are delighted and live a pain-free life”, although none of his patients try to play professional tennis…

…American doubles legend Bob Bryan had a similar operation in 2018. The 40-year-old was on court within five months of his operation and competed with twin brother Mike at the Australian Open.… Read the rest

Read Full Article Here:  Doubles ace Bob Bryan encourages Andy Murray to press ahead with hip op to give himself chance of return

‘I would love to see him do a similar surgery, feel the relief that it gives’: Doubles ace Bob Bryan encourages Andy Murray to press ahead with hip surgery to give himself chance of competitive return

…He has spoken extensively to the 31-year-old Scot over many months, and has strongly recommended hip resurfacing.

… Bob suffered a hip injury during the final against Nikola Mektic and Alexander Peya. Bob tried to play through the pain but the Bryans ended up retiring the final while 5-3 down. ..

…
It turned out to be a season-ending injury for Bob, who later underwent a successful hip resurfacing surgery with Dr. Su in 2018. … Read the rest

…His return ends months of agonising over his future. He was due to come back in Brisbane, before the Australian Open, but withdrew at the last minute and headed for Melbourne, where his trusted friend and renowned surgeon, John O’Donnell, performed the hip resurfacing operation, where a small sleeve is placed over the joint.

Four days after the operation, Murray was walking freely in the streets of Melbourne when he bumped into members of the British media. There was a brief exchange of pleasantries and the player who has come through many crises might have wondered if he would ever again have good news … Read the rest

This also marks my fifth season back playing soccer. Every season I’ve had little nags here and there (Achilles, hamstrings, calfs, etc) but the hip has been injury free. When my conditioning wanes a bit in off season I can get that “achy” feeling after an hour or so playing. But if I use the foam roller a couple of times a week it really helps with that.

My local physio got me using a kettlebell but for only one of the exercises -the basic kettlebell swing. He coached my technique and this really helped my hip function with both strength and range of motion.
Well, … Read the rest

I have been cleared for all activity without restrictions. I am now playing singles tennis without holding back. I am out of shape (for 95 degree singles tennis), and still feel not as flexible or as strong, but have had no pain even after 2 hours of drills and playing. The hardest thing I find doing is bending and staying down, but I have been standing straight for over 10 years. I expect to continue improving as I keep pushing myself.

3/4/2014: I am a 57 year old physician who had a left hip BHR performed by Dr. Raterman on 2/19/2014. I have been posting my pre- and post-surgical thoughts on youtube ( https://www.youtube.com/channel/UCYWv7uE53NUtshlWk20lq4Q/playlists ) for those that are interested.

I first became aware of … Read the rest

At 10 months out from my surgery I began playing soccer again. I am
a 58 year old skinny Italian soccer player. I have played soccer at
least once a week for 40 years without a break unless I was … Read the rest

I am a 52 year old physician who had bilateral hip resurfacing with Dr. Su on
December 18th 2008 at the Hospital for Special Surgery in New York. I had been
diagnosed with moderate to severe osteoarthritis 3 years earlier and
increasingly had to deal with the pain and limitations that this brought on. I
am an avid tennis player who competes locally and in USTA tournaments and
obviously my tennis game was greatly impacted, but so were ordinary activities
of daily living such as tying shoelaces, etc.

My experience with Dr. Su, his staff, and the entire team at the Hospital for
Special Surgery was nothing short of amazing. I left the hospital 6 days after
surgery and … Read the rest

An injury at age 24 started the journey toward this athlete’s BHR surgery 20 years later.

“I am currently more flexible and active now than I was in my twenties and thirties.”

“When I was 24 years old and very active and athletic, I popped my right hip out when I was skiing. The bursa ruptured and it was bone on bone. By the age of 26, I had already lost significant mobility and had increased pain. I went to a few orthopedic doctors and they all told me to live with it as long as I could, and to be prepared for a hip replacement at a very young age. Twenty years later, the pain and … Read the rest

I’m feeling so happy that today I reached my 14th Anniversary. I never though that I would reach that number. At the time of my surgery (I was 54 years old), I would have been pleased if my surface on surface hip replacement had lasted 5 years.

For those asking about impact sports, let me tell you that I have been playing Volleyball, Nationally and Internationally (US Open, World Master Games, Huntsman World Games, League, Senior Tournaments, etc.), since 2004. Before these Tournaments, I played in local Leagues in the San Francisco Bay Area. As far as I remember, I started playing again after 1 1/2 to 2 years after my surgery, but before … Read the rest

Feb 2013 still going strong. No problems with my hip. 100%. More than six years post-op. Thank you Dr. Edwin Su at Hospital for Special Surgery in Manhattan!

Jeff Wiegand and his daughter Rebecca, with dog Lulu, in the Adirondacks on Giant Mountain (via Rocky Peak Ridge). Distance to summit 8 miles, total ascent 5300 feet. Jeff’s left hip was resurfaced on Sept. 26, 2006 by Dr. Su at the Hospital for Special Surgery in NYC. 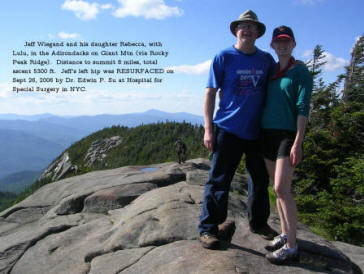 3 years post-op, Jeff Wiegand plays squash on his resurfaced hip, followed by a testimonial about resurfacing by Richard Millman, squash … Read the rest

This archive footage shows badminton player Dave Eddy in action on the court. Dave has represented England over fifty times, winning a World Championship in the process and has bilateral Birmingham Hip Resurfacings (BHRs) which were both performed by Mr McMinn some fourteen years apart.

Dave says surgery ‘transformed’ him from “something of a cripple to someone who could walk normally and play badminton to whatever level he wanted.”… Read the rest