Robert was sick of sitting on the side lines due to his hip pain – following his right BHR in September, 2014 he has been skiing, surfing, skateboarding, downhill mountain biking, and stand up paddleboarding all pain free! 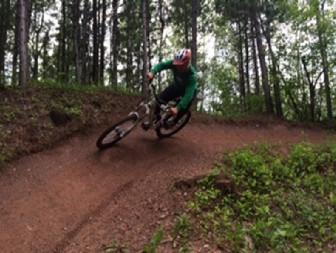 I apologize for not reporting back sooner, but it’s hard to want to stop having so much fun with my new high performance hip. I can’t thank you enough Doc for giving me an opportunity to continue living my life without limitations. After our last visit (six months after surgery) I headed up north to catch the last weekend of chairlift service skiing in the U.P. I was very excited to give the new hip a go on some spring snow. When I got there it was like all the forces in the universe were "in line and on time". It was sunny, warm, and uncrowded. I walked through the dry snowless parking lot and over to the snow. I dropped my skis to the ground that old familiar sound of the skis hitting the snow made me smile. I bent down to tighten up the buckles on my boots, and that’s when it hit me… I could actually bend down and buckle my boots. Because I was at Indianhead I didn’t get a chance to ride the lift up for the first run and some reflection. The parking lot is at the top of the hill. It was showtime!

I skated up to where I was able to find my line down the hill, and or a way out, if this didn’t go well. I pushed off and hoped for the best. I let the skis run a bit before I put them on edge. I held back a bit until I got a feel for if that hip was going to cause some pain, and it didn’t. By half way through that run I was doing high speed G.S. style turns to the bottom. At that moment I realized that from this day forward I was going to be living the life I was supposed to be, not living the life of a tore up middle aged guy sitting on the side lines talking about the good ole days.

If anyone is reading this that might be on the fence about the operation I can tell you this: since my operation I have been skiing, surfing, skateboarding, downhill mountain biking and stand up paddleboarding (SUP). I’m waiting for the winter to come back so I can snowkite (which is the activity I’m truly most crazy about) and I’m sure that it will go as smoothly as the others. If what I am able to do with my life now, can be translated to a life that you want to get back doing, take what he is offering you. Dr. Rogerson and Renee will be the greatest two people you let into your life…. Oh yea I almost forgot the most important part. NO PAIN! Thanks to all who helped me along. More Pictures are to come.