A total hip replacement, THR, has been the gold standard for many years. THR is major surgery that can result in a long post-op recovery and often limits your activities depending on the type of hip device that is used.

The Bone & Joint Channel A video to accompany the article “Effects of physical activity on long-term survivorship after metal-on-metal hip resurfacing arthroplasty: is it safe to return to sports?” published in the October 2019 issue of the Bone & Joint Journal. Read the full article: https://online.boneandjoint.org.uk/do…

Infographic: Effects of physical activity on long-term survivorship after metal-on-metal hip resurfacing arthroplasty –  is it safe to return to sports?

October 2018  –  Metal on metal hip resurfacing (MoM-HR) is an alternative to total hip arthroplasty in young and active patients. The purpose was to determine the survivorship of MoM-HR procedures performed in patients aged 45 years and younger assessing patient-reported outcome measures (PROMs) at minimum 5-year follow-up…

… The survivorship of HR in the younger than 45 age-group was similar to that of total hip arthroplasty, as well as HR in … Read the rest

Patricia Walter, owner of the Surface Hippy Website, responded to his concerns about hip resurfacing in the following article:

Hip Resurfacing is a very special method of replacing a hip. Ever since I began this website in 2005, hip resurfacing has never been widely accepted by the medical community. There might be several reasons for that. One is that hemi-resurfacing which only replaced the femoral portion of the device had very poor success. When full hip resurfacing began, the situation was now metal on metal bearings, not metal on bone bearing surface. So once a procedure received … Read the rest

Published on Dec 17, 2017 – BHR The Past and the Future of Hip Resurfacing

Dr Edwin Su takes a look at the Birmingham Hip Resurfacing (BHR) System’s 20 year history and outcome data from implant survival rates to opportunities for patients. In his closing slide Dr Su states that hip resurfacing can have advantages of THR including bone preservation, greater stability and a high activity level. He also says that hip resurfacing is alive and well for selected patients. There may only be a few surgeons performing hip resurfacing, but those who have experience with it are still strong advocates.

On 30th July 1997, Mr McMinn performed the world’s first Birmingham Hip Resurfacing (BHR) operation. Two decades later, we are celebrating the success of this bone-conserving procedure with the people whose lives have been changed by BHR surgery.

In this video, you will hear testimony from a range of Mr McMinn’s BHR patients over the years – and we are delighted to hear how the BHR has had such a positive impact on patients’ lives.

Thank you to everyone who took the time out to record and send in their video clips, we really do appreciate it!

“Currently, there is no evidence to support an indication for a metal-on-metal total hip, but for young, active males with [osteoarthritis] OA who are of average or above stature and have a strong desire or need to return to a high activity level, either in their vocation or recreation, there is a substantial body of evidence supporting continued use of surface replacement as a reasonable alternative,” Robert L. Barrack, MD, said at The Hip Society Specialty Day Meeting…

…“The indications are narrow,” he said. “I have restricted this virtually entirely to males under 60 [years of age]. They have to be average or above average stature because the smaller sizes are not available, and I actually do not offer it to … Read the rest 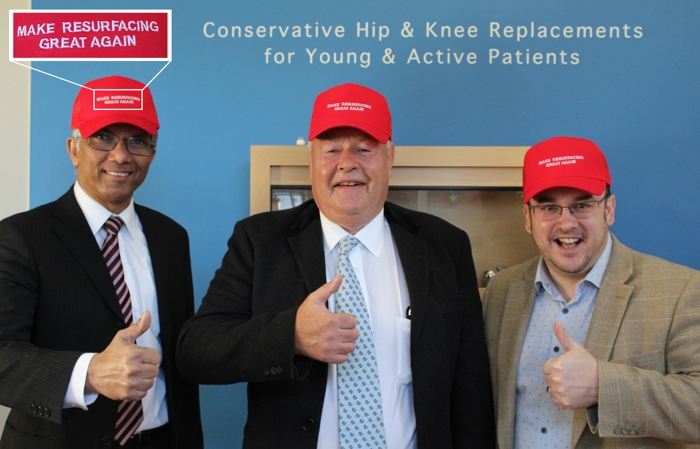 Published on Dec 22, 2016 – A video lecture presented by Mr McMinn giving an update of Hip Resurfacing in December 2016.
… Read the rest

I only post now and then with updates and this one is over due. I am very pleased to report that i celebrated 25 years of my resurfaced hip in September.

I thought earlier this year that I might have a problem as I was having lots of pain in my hip and pelvis. I had x-rays and scans at the Royal Orthopaedic Hospital in Birmingham and they showed my implant was very much ok. Turns out it was my back causing the pain and after several weeks of physio I’m back to normal.  So relieved my hip was ok after 25 years.  Mr McMinn is the best.

My 2 boys both born post op are now adults, … Read the rest

Dr. SuDr. Su made this presentation at the 11th Annual Hippy Gathering in San Jose, CA on March 9, 2013 The presentation and meeting was dedicated to Vicky Marlow, Hip Resurfacing Patient Advocate, who started the group and organized the Gatherings. Vicky passed away in February 18, 2013. … Read the rest
… Read the rest

The retrospective study, which analyzed 925 hip resurfacings
performed by Edwin Su, MD, between 2004 and 2009 with a
minimum follow-up of 2 years, looked at three implants:
Wright Medical’s Conserve Plus Total Resurfacing Hip System,
Biomet Orthopedics’ ReCap Femoral Resurfacing System and
Smith & Nephew’s Birmingham Hip Resurfacing System. Conserve
Plus and the Biomet ReCap were used as part of clinical
trials, while the Birmingham hip was used after FDA approval
of the implant in 2006. Clinical scores and radiographs were
obtained at 1 month, 3 months, 1 year, and every subsequent
year. The hips in the study had a minimum of 2 year follow
up, both radiographically and … Read the rest

The first BHR was implanted in July 1997 and it is unchanged until present day.

Derek McMinn has done over 6000 total hip surgeries and over 3,500 MoM Hip Resurfacings. His 10 year survivorship for the BHR (Birmingham Hip Resurfacing)in a series of 3095 performed up until December 2009 is 97% from all patients. His first metal/metal resurfacing prototype was implanted in 1991, and the current design, the first BHR was implanted in July 1997 and has not changed in any way since then.