There have been 14,901 total resurfacing procedures reported to the Registry, an additional 603 procedures, compared to the last report.

The use of resurfacing hip replacement in Australia continues to decline. The number of procedures reported in 2011 was 39.7% less than in 2010 and 68.5% less compared to the peak in 2005.

Osteoarthritis is the principal diagnosis for total resurfacing hip replacement (95.0%), followed by developmental dysplasia (2.5%) and osteonecrosis (1.7%).

The BHR remains the most used resurfacing hip prosthesis in 2011. Although its use has declined in absolute numbers in 2011 the proportion of resurfacing procedures using BHR has increased from 62.6% in 2010 to 75.4% in 2011 (Table HT61).

The BHR resurfacing prosthesis has a cumulative percent revision at 11 years of 7.1%.

At 11 years, hybrid fixation has the lowest cumulative percent revision of 6.0% compared to cemented (7.2%) and cementless fixation (7.8%) (Information from 2012 National Registry under Total Hip Replacement Information)

There is a higher rate of revision for patients 65 years or older for the first six months, after this time there is no difference compared to the other age groups (Tables HT67 and HT68 and Figure HT38).

Revisions per 100 observed component years and yearly cumulative percent revision of total resurfacing hip prostheses are listed in Tables HT77 and HT78. There are seven prostheses with over 1,000 observed component years, the ASR, Adept, BHR, Cormet, Cormet 2000 Bi-coated, Durom and Mitch TRH. The BHR resurfacing prosthesis has a cumulative percent revision at 11 years of 7.1%. 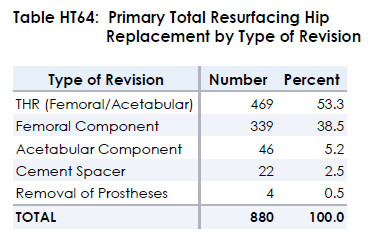 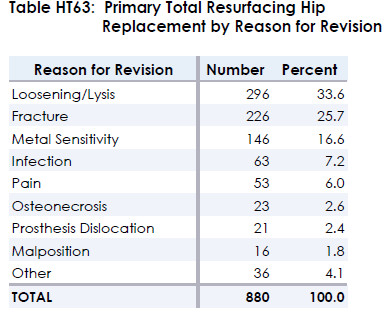 I added the information below so people can compare the outcomes of hip resurfacing to total hip replacement.