In the summer from 2005 I went to Belgium for resurfacing from my right hip by Koen de Smet. I was born with hip dysplasia and had a pelvic osteotomy 30 years ago. The last few years I had a lot of pain and couldn’t walk more than 50 meters without a crutch. I couldn’t sleep without painkillers and I feel like an 80 year old woman while I was 46 years on that moment.

In the Jan Palfijn hospital they think different about patient care than in the Netherlands. At least, that was my experience. Most nurses were really rude and not friendly. Throughout the hospital showed very sober and the rooms were poor, broken hand support in the bathroom, missing wall tiles etc and the food was disgusting bad. But I went for the surgeon and he was ok. The surgery and pain where to do well and 3 days after I went home.

The result from the resurfacing was fantastic, no more pain, limping, crutches and finally a normal life without any restrictions. I was so happy and told everybody about my miracle. It was not necessary to tell people because everybody saw the result that I didn’t need a crutch anymore and my gait became pretty normal. I was very careful with my hip and I also expected that my resurfacing would last because I did not overdo my activities,  but did  exercise by cycling, walking and swimming. I never did impact sports, the only excess was skiing one or two times a year. I also eat very healthy and watch my weight.

Before receiving the BHR, I knew and read a lot about resurfacing but after the surgery I never read anything about hips or BHR’s. I was finished with that chapter. I wanted to forget everything and go on with my life. Even so I didn’t know I had X-rays at home or that I need a check up after a while.

Approximately 2 years later I got some stiffness and pain in my groin after walking a few kilometers. Normally I walked more than 5 kilometers with the dogs without any problem. That was weird but I did not really pay any attention to it. It was actually slowly getting worse.

If I knew then what I know on this moment I would have contacted my surgeon, but then I was so frustrated and scared about the hospital and my bad experience that I do not dare to go back. So I denied my complaints and pretended nothing was wrong. I was very good at hiding my symptoms, by always the last to stand so no one saw how difficult my first steps were. Why I did it this way, I personally never really understood but I think it mainly has to do with repressed fear. I also started taking painkillers if the pain was to bad. Walking and standing on one leg was very painful so I usually walked with a bent knee and just leaned on my toes. That is what they call: axle weight pain.

In the summer from 2009 we were on a city break in Krakow, Poland and had to walk a lot.  The pain was so terrible and I couldn’t hide my limping, so I told my husband and children that I’ve got big problems with mine right hip. We rented bikes so I could get around easily. When we came home my husband forced me to email Koen de Smet, he replied the same day and gave me an appointment for a few days later. He was a little annoyed that I never come back for check up but the X-ray showed a little radiolucent line next to the stem and the stem Sat higher than it was originally placed. The metal ions where also increased. Conclusion: loosening head. I needed an operation to get a total hip replacement!

I was so angry, disappointed, sad that this had happened to me – but afraid to undergo surgery again to be in that awful hospital. I knew the recovery would be difficult so I couldn’t eat well and sleeping very well for weeks.

Two months later I had the surgery on Friday by Koen de Smet and that was the only time I saw him, 30 seconds before I went in a deep sleep. After my surgery, nobody would tell me how the operation went because all doctors went on holiday that Friday afternoon. The pain was OK, The nurses were more friendly than 4 years before, but I was feeling very unhappy in the hospital.  I was walking well and with the crutches the PT let me go so I left on Sunday. It was unusual that I did not know whether only the head was replaced or that I had ceramic on ceramic prosthesis.

The answer came one week later through email by Koen de Smet: only the head was replaced, the cup was OK, so my new prothesis was a stem type Profemur L from Wright with a modular head type BHR from Smith & Nephew.

The rehabilitation was more difficult than 4 years before when I get my BHR. After 8 weeks, I still needed one crutch with walking. The X-ray showed that the prosthesis was fine and there was nothing wrong.

A few weeks after the post op, I had email contact because of the pain I still had and then I heard that the cause of my loosening was: avasculair necrosis (AVN)

That was the moment when I started with searching and reading about AVN on the internet and I found the surface hippy website. I read the story from Dr. Bose about AVN where he was told that AVN could be caused by a single dose of steroids.

I remembered that in march 2007 I received an anafylactic reaction after a bee sting. That is because my husband is a bee keeper I had to started with a special desensibilsation program with bee venom injected in the beginning every week and later once in a month and once in the 2 months, 5 years long. They had also given me an Dexamethason injection intra veneus when I had that reaction.

I wondered if it was possible that the bee venom treatment (Bee venom move the body to manufacture cortisol) or maybe the single dose Dexamethason could caused the AVN. Because the bee sting was in march 2007, I started with the bee venom immunotherapy in the summer 2007 and on the end of 2007 my BHR started with hurting and stiffness.

I had asked several doctors (allergists and OS) and the most of them thought it had nothing to do with the emergence of AVN.  A few, however, think it has contributed to the development of ANV. But that’s hard to say afterwards.

It is now 3 1/2  months after the revision.  It is very slowly getting  better. The feeling of the THR is not as good as a BHR and is less natural. Hopefully it continue to improve as my hip continues to heal. 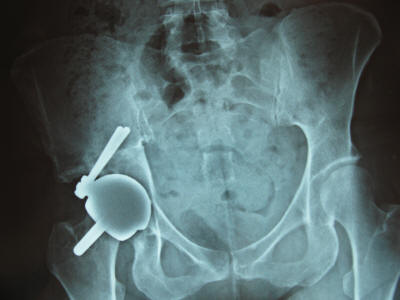